The Secret World of Arrietty

The Secret World of Arrietty 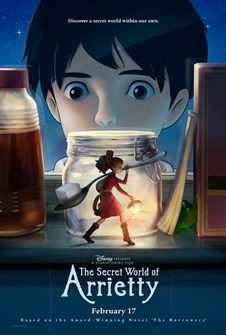 In a secret world hidden beneath the floorboards, little people called Borrowers live out of sight of humans. But when brave and tiny Arrietty is out gathering supplies, she is discovered by Shawn, a human boy, and they begin to form a friendship that blossoms into an extraordinary adventure. A gorgeous and adventure-filled adaptation of The Borrowers, one of the most beloved children’s books of all time, this sumptuously animated and heartwarming story features the voices of Bridgit Mendler, David Henrie, Amy Poehler, Will Arnett, and Carol Burnett.