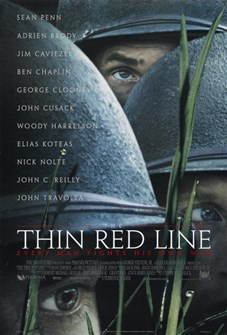 "What's this war in the heart of nature?" An unknown soldier asks this question in the opening of Terrence Malick's rapturous depiction of the battle for Guadalcanal Island during the Pacific campaign of WW2. While a historian might provide textbook responses about strategic importance or national security, Malick's film chooses to grapple with this problem along a far more philosophically and spiritually complex approach. Rather than a contextualization of why we fight, Malick takes us deep into the physical, emotional, and psychological traumas of combat that often leave more questions than answers after the smoke has cleared and the casualties have been tallied. Through a symphony of voices, American, Japanese, and those of the island's natives, audiences will journey to the lines that divide us and behold the violence that results when they are shattered in the maelstrom of war. Featuring a tremendous ensemble cast, lush cinematography, and a richly layered construction, THE THIN RED LINE is a towering work that stands defiant against conventional narratives of war cinema.