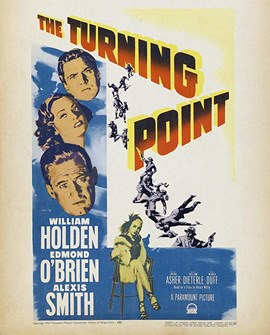 Prosecutor Edmond O'Brien leads a government probe into a crime syndicate headed by sinister Ed Begley, but he's hamstrung by pervasive political corruption. Crusading reporter William Holden agrees to assist—while he and O'Brien vie for the attention of a loyal Alexis Smith. The hard-edged script is a real-life lift from the Kefauver Committee's exposé of organized crime. L.A.'s Bunker Hill, Angel's Flight and Olympic Auditorium all accentuate the period realism.