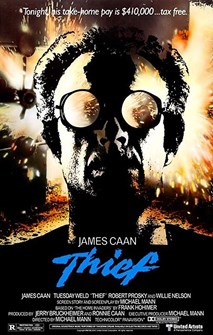 Odd Obsession Movies and the Music Box present a special 35mm presentation of Michael Mann's 1981 neon-crime classic THIEF, starring James Caan as Frank, an ex-con safecracker trying to finish one last job in Chicago before getting out of the game for good. Set to a pulsing score by Tangerine Dream, Mann renders Chicago an alien landscape of interlocking streets and shimmering nocturnal color. Like Frank though, Odd Obsession are in a fight for their own survival to keep their doors open! One of the last remaining video stores in the country, Odd Obsession has been a fixture in Chicago's movie culture since 2004. Boasting a library of 25,000+ titles, please don't let this treasured establishment succumb to rising rent costs and shut it's doors forever!

Co-hosted by film critics Ignatiy Vishnevetsky (A.V. Club) and John Dickson (Cine-File), come see one of the greatest "first" films of all time and help keep Odd Obsession alive! Let's face it: after one viewing of THIEF, you'll be needing somewhere to rent the rest of his outstanding filmography.