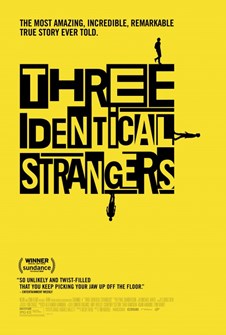 Three strangers are reunited by astonishing coincidence after being born identical triplets, separated at birth, and adopted by three different families. Their jaw-dropping, feel-good story instantly becomes a global sensation complete with fame and celebrity, however, the fairy-tale reunion sets in motion a series of events that unearth an unimaginable secret –– a secret with radical repercussions for us all.  THREE IDENTICAL STRANGERS is an exuberant celebration of family that transforms into a thriller with colossal implications and proof that life is truly is stranger than fiction.

"A documentary that plays like a nerve-jangling thriller" -- The Wrap