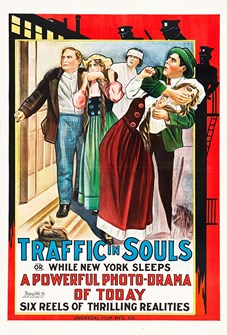 The earliest feature films to grace American screens were adaptations of stage productions or spectacles imported from Europe. It’s no wonder that Traffic in Souls, an all-American, effortlessly cinematic blend of thrills, melodrama, and social critique, would stand out like a flare in a tinder box. Promoted as a “full-blooded sermon” that allegedly dramatized the results of a highly-publicized 1910 grand jury investigation into sex trafficking chaired by John D. Rockefeller, Jr., the film follows two sisters who work as shopgirls in a New York candy store: Mary (Jane Gail), who is dating a police officer (Matt Moore), and Lorna (Ethel Grandin), who will soon be abducted and deposited at a brothel clandestinely operated by one of the city’s most vocal social reformers. (The Pizzagate of its day?) The film’s political sensibility fits squarely within the social concerns of the Progressive Era, but the technology that moves the story forward and exposes the crime ring — dictagraphs, telegraphic pens, secret communication channels — pushes it into the realm of pulp espionage, a runty American cousin of the hyperbolic crime cinema of Louis Feuillade and Fritz Lang, cut to a frenetic tempo that rivals D. W. Griffith. An enormous hit that sold 30,000 tickets on Broadway in its first week of release, inspired a legion of imitators, and became the first feature film to be novelized, Traffic in Souls may be past its centenary, but it’s never stopped to catch its breath. 35mm Print courtesy of the Library of Congress