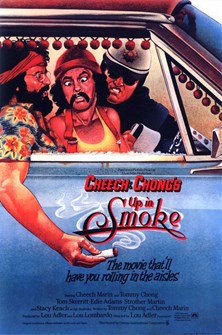 The drug-addled duo are on a road trip throughout California; that is to say, a road trip they hope will culminate in finding some quality weed. Instead, a series of mishaps result in their respective deportations to Mexico. Desperate to get back to the states so they can perform in their band's gig later that night, Cheech and Chong unwittingly agree to drive a very unique car across the border — rather than steel and various metal bits, the vehicle is constructed entirely out of marijuana.