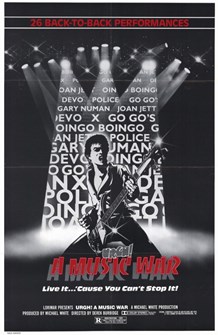 Unabashed propaganda for the new wave of rock ’n’ roll on the rise at the head of the Reagan era, URGH! A MUSIC WAR captured some of the most exciting musical acts of its era live in prime form. URGH! provided each of its 24 bands the space of a single song to leave an indelible impression before moving along. Urgh! has endured as a vital time capsule of its musical moment, presented in hi-fi with relatively little corporate intervention. So please join us as we present Devo, Echo & the Bunnymen, X, 999, Klaus Nomi, Au Pairs, Oingo Boingo, UB40, The Cramps, Gary Numan, Orchestral Manoeuvres in the Dark, XTC, and many more in the musical event of 1981.