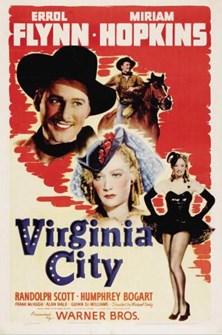 Chiefly known as the movie that preposterously cast Humphrey Bogart as a Mexican bandido with a pencil mustache, VIRGINIA CITY remains one of Curtiz's most entertaining Westerns, with terrific stunt work and sultry Painted Desert vistas. In the waning days of the Civil War, Union officer Errol Flynn learns of a conspiracy to prop up the Confederacy by diverting a gold shipment to Jefferson Davis himself. Can he trust showgirl Miriam Hopkins to smash the Rebs? 35MM preservation from the Library of Congress