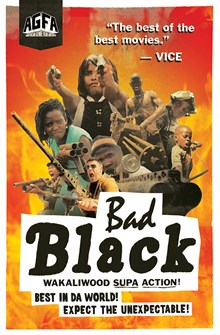 ***In Person Q&A Following BAD BLACK with Alan Ssali Hofmanis, co-producer and star (aka America's greatest action star, according to Uganda at least), and Ebola Hunter, with props, costumes, paintings, and more. Come early for introduction with special 10 minute pre-show with clips, behind the scenes and more. ***

Welcome to Wakaliwood, Uganda: home of “DA BEST OF DA BEST MOVIES!” and the vanguards of DIY commando cinema.

[Wherein] a mild-mannered doctor, portrayed by Wakaliwood producer Hofmanis, is trained in the art of ass-kicking commando vengeance by a no-nonsense ghetto kid named Wesley Snipes(!) in an effort to steal back a family heirloom from Uganda's toughest gang. A multitude of subplots ensue at a breakneck pace as Nabwana hurls his charismatic cast through bombastic firefights, dizzying motorcycle chases, and an absolutely madcap prison riot – all photographed with a thrilling gonzo panache and seeped in gleefully silly, self-deprecating humor. And in Uganda’s finest storytelling tradition, the films are complemented by the acerbic wit of narrator/”Video Joker” VJ Emmie, who sums up the Wakaliwood experience with a single sentiment: ‘It is a love story...LOVE OF ACTION!

WHO KILLED CAPTAIN ALEX contains Ugandan commandos, kung fu, a MIDI version of Seal’s ‘Kiss from a Rose’, a rambunctious (and sometimes farting) in-film commentary track, and some more supa action. It’s a bat-shit crazy milestone to be honored in the film history books.