World City in its Teens: A Report on Chicago

World City in its Teens: A Report on Chicago

A FILM BY: Heinrich Hauser 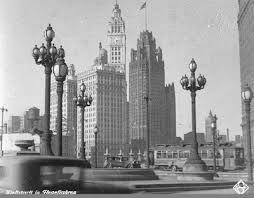 A Part of The Music Box 90th Anniversary | Live accompaniment by Music Box house organist Dennis Scott | Co-presented by the Chicago Film Society
Since 2011, the Music Box has offered a monthly silent cinema showcase that presents these treasures the way they were meant to be seen, with rare 35mm and 16mm prints projected at the proper frame rate, with live musical accompaniment.

The quintessential film genre in the late 1920s and early 1930s may well have been the city symphony—an international idiom that bluntly analogized the frenetic pace of modern urban life with celluloid montage.  One especially neglected example is Heinrich Hauser’s WELTSTADT IN FLEGALJAHREN: EIN BERICHT ÜBER CHICAGO offers almost as many perspectives on the Windy City as its mouthful of a title has inspired variant English translations, among them WORLD CITY IN ITS TEENS, A WORLD CITY STRETCHES ITS WINGS and METROPOLIS AT AN AWKWARD AGE. Hauser, a nomadic German writer and photographer, visited Chicago in 1931 and recorded a wide range of neighborhoods and conditions, fashioning a civic portrait both dazzling and bleak, sterling and sobering. Back home, the Berliner Borsen-Zeitung praised the film for its vision of “America stripped of illusions.” For us, Hauser’s film serves as a reminder of the longevity of Chicago’s tangle of contradictions.