Enjoy a charming, vintage-style Valentine's with your sweetheart at the Music Box! This "Sweetheart Sing-Along" begins with a selection of enduring and adored love songs hosted by Joe Savino & played by Dennis Scott on the Music Box's organ, followed by the classic romance CASABLANCA. Song lyrics, projected on the movie screen for your sing-a-long pleasure, will include such enduring tunes as "You Are My Sunshine," "Bicycle Built for Two" and "Let's Call the Whole Thing Off." Then watch a screening of the beloved romantic drama, starring Humphrey Bogart and Ingrid Bergman. 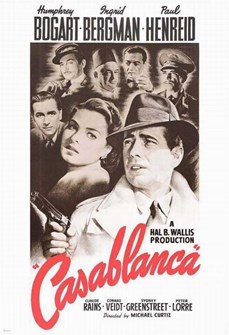