Join the Music Box Theatre and Author Jon Kitley for a special screening of THE GIANT CLAW to celebrate the release of Kitley's new book, Discover the Horror.

About Discover the Horror:

For over five decades, Jon Kitley has been on a never-ending quest to explore as much of the horror film genre as possible, from the early days of terror television to movie theaters and drive-ins. Now, for the first time, fans of Kitley's Krypt can read how it all started (and continues to this day) as Jon shares his personal "tales from the road" experiences, having attended over a hundred horror movie conventions from coast-to-coast. Plus, discover plenty of tips on how YOU can get the most out of your own journey into Monsters, Maniacs, and the Meaning of it All!

While Jon Kitley continues to be a Cinematic Archeologist, he is also a staff writer for Horror Hound magazine, where you can read his RondoAward-winning column, They Came from the Krypt. His work has also appeared in Evilspeak magazine, as well as in the books Horror 101: TheA-List of Horror Films and Monster Movies, Hidden Horror, When Animals Attack, and Strange Blood. He has also appeared in several documentaries, such as Monster Madness: The Golden Age of the Horror Film, Shout Factory's Horror Hunters, and many more! When not attending multiple horror conventions, 24-hour marathons, and hitting the drive-ins, he is hard at work on his website, Kitley's Krypt, which has been helping fans Discover the Horror since 1998. 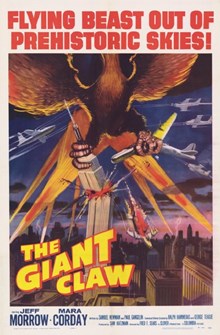 Engineer Mitch MacAfee (Jeff Morrow) spots a UFO while directing a study at the North Pole. But when the Air Force arrives, they cannot find anything visually or on radar, throwing Mitch's reputation into doubt. Soon, though, many airplanes are reporting attacks by a UFO, which turns out to be a giant speeding bird from outer space. Along with mathematician Sally Caldwell (Mara Corday), Mitch tries to determine a way to stop the bird, which has a force field that renders all weapons useless.