Jackey Neyman Jones played Debbie in MANOS: THE HANDS OF FATE, arguably the “worst movie ever made.” The film was, at its heart, a home movie that just happened to be shared with the world. Jackey Neyman Jones co-wrote GROWING UP WITH MANOS HAND OF FATE: HOW I WAS THE CHILD STAR OF THE WORST MOVIE EVER MADE, AND LIVED TO TELL THE STORY. 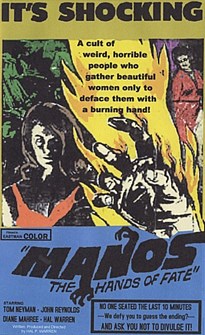 A family on a desert excursion encounters cultists who use human hands as sacrificial offerings to their god in MANOS: HANDS OF FATE!

MANOS: THE HANDS OF FATE, the sole directorial effort of Texas fertilizer salesman Harold P. Warren, perplexed even the most jaded Drive-In audiences and was deemed by many “the worst movie ever made”. Nearly lost, the original 16mm Ektachrome film elements have been finally unearthed and lovingly restored by Ben Solovey to create the definitive version of this accidental masterpiece. There’s no other movie like MANOS… now in HD with picture and sound unseen since 1966.