No Wire Hangers…EVER!!!
MOMMIE DEAREST, the beloved 1981 camp classic returns to The Music Box Theatre with a special Mother’s Day screening! The festivities, hosted by Dick O’Day, features special guests Joan Crawford (portrayed by David Cerda, Playwright/Artistic Director of Hell in a Handbag Productions and lead singer of The Joans rock-n-roll band) and Joan's assistant and chief flunky Carol Ann (portrayed by Ed Jones of Hell in a Handbag Productions and The Joans rock-n-roll band).
The fun kicks off at 2pm with a mother-daughter costume contest featuring MOMMIE DEAREST-themed prizes, followed by a screening (complete with interactive screening guide) of the 1981 Mount Everest of mother’s day movies. Based on the national bestseller, the notorious box office bomb stars Faye Dunaway in her infamous, over-the-top performance as ultimate movie star Joan Crawford and details the battle of wills with her adopted daughter Christina (portrayed by Mara Hobel and Diana Scarwid). Mother’s Day mimosas will be available in the Music Box Lounge.
Dick O’Day (Emmy award winning Wild Chicago correspondent) has emceed numerous screening events at the Music Box, most recently the sold-out Hex-Along Hocus Pocus Halloween screening. David Cerda, who portrays Joan Crawford, is playwright and Artistic Director of Hell in a Handbag Productions with multiple hit shows to his credit since its founding in 2002 while Ed Jones, who portrays Carol Ann, has a long history of standout camp performances with Hell in a Handbag Productions, starring in their recent revival production of L’Imitation of Life.
Please note that this event is NOT suitable for children under 17 years of age. MOMMIE DEAREST is Rated R.
Dick O'Day photo by Ricky Aguilar Studios 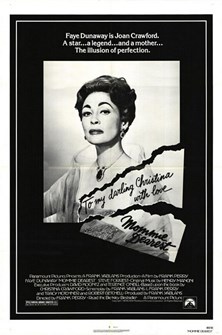 When her adoptive mother Joan Crawford died in 1977, erstwhile actress/author Christina Crawford and her brother Christopher were left out of Joan Crawford's will, "for reasons which are well known to them." Industryites have suggested that it may have been this posthumous act of rejection rather than an alleged lifetime of parental abuse that inspired Christina Crawford to pen her scathing autobiography Mommie Dearest. The 1981 film version of this tome was evidently meant to be taken seriously, but the operatic direction by Frank Perry and the over-the-top portrayal of Joan Crawford by Faye Dunaway (whose makeup is remarkable) has always seemed to inspire loud laughter whenever and where-ever the film is shown. According to the film (and the book that preceded it), Joan Crawford was a licentious, child-beating behemoth, who stalked and postured through life as though it was one of her own pictures-more Strait-jacket than Mildred Pierce.

Only Fans - A Chicago Comedy Show