This Presidents’ Day weekend, the Music Box hails to the chief with a special screening of DAVE! In this classic 90s comedy, Kevin Kline is Dave Kovic, an ordinary man who happens to look exactly like the President of the United States. To avoid a scandal when the President suffers a stroke, the good-natured Dave must secretly assume the role of Leader of the Free World. Surprisingly, he’s pretty good at it!

Director Ivan Reitman (GHOSTBUSTERS, KINDERGARTEN COP) and Kline craft an intelligent, hopeful political satire from an Oscar-nominated screenplay by Gary Ross (BIG). A box office success on its release in 1993, DAVE proves that when the right people are in charge, a little bit of good can come out of Washington D.C. 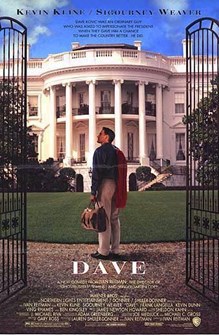 Just who runs this country anyway? For comedy fans, the answer is - DAVE. Kevin Kline and Sigourney Weaver star in this box-office winner about an uncanny Presidential lookalike named Dave, who's recruited by the Secret Service to become a momentary stand-in for the President of the United States. However, things don't turn out exactly as planned and Dave finds himself continuing his masquerade as Chief Executive indefinitely. Ivan Reitman directs and supporting players Frank Langella, Ving Rhames, Ben Kingsley and Charles Grodin supply more reasons to stand up and cheer. Many real-life Washington politicos and pundits join the fun as Dave uses ordinary-guy savvy to deal with the extraordinary responsibilities of the Oval Office.