On Sunday March 5th, 2017, 35MM screens all over the world will champion the beautiful format of film and revel in all of the glorious depth and richness that ONLY film can provide: Reel Film Day is the first ever celebration of all things 35MM.

And why is Reel Film Day on March 5th? Because it’s 3.5, obviously.

Tickets are $12, and each ticket is good for BOTH films. It's a 35MM Double Feature! 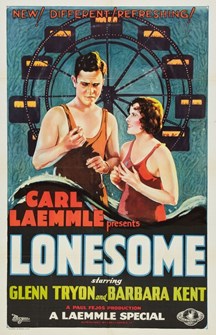 It's the classic story of boy-meets-girl, both lonely but not alone, cyphers lost among the bustle of the big city until at last fate brings them together. They share a brief moment of utter joy (in this case at Coney Island) before being torn apart again to go back to their lives. The style, however, is not classical at all. Director Fejos uses double exposure, quick edits, and a carefully designed color palette to create a contrast between the industrial city and the oasis of the amusement park. Produced at a time of great change, the sound design is also important, particularly the repeated use of Irving Berlin’s “Always,” and features three talking sequences, added after the entire film had been shot silent. The original nitrate print was repatriated to the US in a trade James Card made with Henri Langlois at the Cinémathèque Française. The title has gone through no fewer than three preservations as technologies became available to restore the film to its original visual and auditory brilliance, and restore the title to its place among the greats of the late silent era. 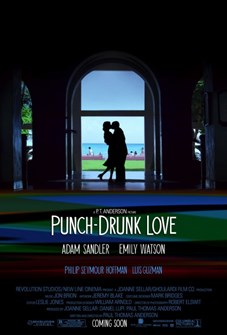 Chaos lurks in every corner of this giddily off-kilter foray into romantic comedy by Paul Thomas Anderson. Struggling to cope with his erratic temper, novelty-toilet-plunger salesman Barry Egan (Adam Sandler, demonstrating remarkable versatility in his first dramatic role) spends his days collecting frequent-flyer-mile coupons and dodging the insults of his seven sisters. The promise of a new life emerges when Barry inadvertently attracts the affection of a mysterious woman named Lena (Emily Watson), but their budding relationship is threatened when he falls prey to the swindling operator of a phone sex line and her deranged boss (played with maniacal brio by Philip Seymour Hoffman). Fueled by the careening momentum of a baroque-futurist score by Jon Brion, the Cannes-award-winning PUNCH-DRUNK LOVE channels the spirit of classic Hollywood and the whimsy of Jacques Tati into an idiosyncratic ode to the delirium of new romance.

Color Out of Space