On May 13, 2019, Doris Day passed away. A fixture of popular films of the 1950s and ‘60s, Day would light up the screen with her (seemingly) effortless charm and tremendous talent as an actress and singer. Consistently ranked as one of the top box office draws in America, she had a Girl Next Door warmth, with a light comedic touch and fierce emotional honesty, showcased in musicals, comedies, thrillers and dramas from some of the industry’s top directors, and often alongside the biggest leading men of the day.

At the time of her death, Doris Day had been retired from acting for nearly 50 years in order to focus on animal welfare causes. However, her work lives on, and the Music Box will showcase a handful of her indelible screen performances with a special Matinee series.

Sat, Sep 28th
The Man Who Knew Too Much

Sun, Sep 29th
The Man Who Knew Too Much 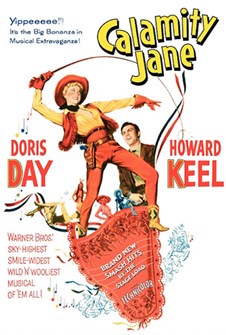 In the lonely Deadwood, Dakota, territory, sharpshooter Calamity Jane (Doris Day) falls for cavalry Lt. Danny Gilmartin (Philip Carey) when she is forced to rescue him from the Indians. Recognizing that the women-starved townsmen long for a "real" woman, Calamity journeys to Chicago to bring back famous singer Adelaid Adams, but mistakenly brings her maid Katie instead. Heartbroken when Danny falls for Katie, Calamity all but ignores her jovial friend Wild Bill Hickok (Howard Keel). 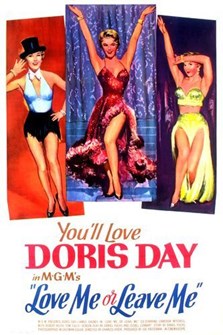 During the 1920s, a small-time Chicago criminal, Martin Snyder (James Cagney), discovers a beautiful dancer, Ruth Etting (Doris Day), after she's fired from her job at a nightclub. Under Martin's management, Ruth works her way to the top of the entertainment industry, eventually becoming a famous jazz singer and Broadway actress. But as Ruth's popularity grows, Martin's obsessive and controlling behavior begins to threaten her success and happiness. 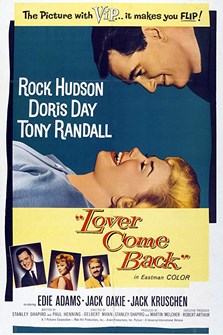 Jerry (Rock Hudson) is a slick adman who uses women and booze to woo his clients. One day, his tactics draw the ire of Carol (Doris Day), an executive at a rival agency, who reports him to the Ad Council. Jerry deflects Carol's accusations using the testimony of a nightclub performer (Edie Adams), whom he pays off with a starring spot in a fake ad campaign. But when Jerry's clueless boss (Tony Randall) broadcasts one of the ads on TV, he's forced to create a new product.

The Man Who Knew Too Much 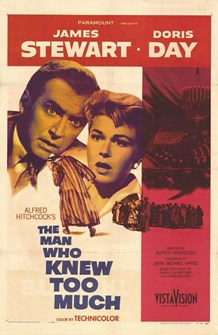 Dr. Ben McKenna (James Stewart) is on vacation with his wife (Doris Day) and son in Morocco when a chance encounter with a stranger sets their trip, and their lives, on a drastically different course. The stranger, killed in front of the family in the marketplace, reveals an assassination plot to the Americans. The couple's son is abducted in order to ensure the plot is kept secret, and suddenly the mother and father, with no help from the police, must figure out a way to get their child back. 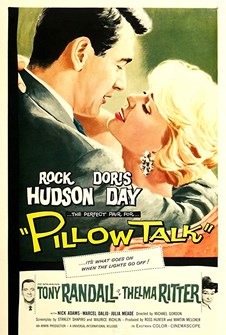 Playboy songwriter Brad Allen's (Rock Hudson) succession of romances annoys his neighbor, interior designer Jan Morrow (Doris Day), who shares a telephone party line with him and hears all his breezy routines. After Jan unsuccessfully lodges a complaint against him, Brad sets about to seduce her in the guise of a sincere and upstanding Texas rancher. When mutual friend Jonathan (Tony Randall) discovers that his best friend is moving in on the girl he desires, however, sparks fly.