This Book Really Ties the Films Together - Book Event + Screening

Join author Adam Nayman for a 35mm screening and discussion of THE BIG LEBOWSKI as well as to hear new excerpts from his new book, The Coen Brothers: This Book Really Ties the Films Together. Following the screening Adam will be signing copies of the book which will also be for sale at the theatre.

For the first time ever, fans will have access to the definitive guide on the filmography of the Academy Award–winning creators the Coen brothers. From such cult hits as Raising Arizona (1987) and The Big Lebowski (1998) to major critical darlings Fargo (1996), No Country for Old Men (2007), and Inside Llewyn Davis (2013), Ethan and Joel Coen have cultivated a bleakly comical, instantly recognizable voice in modern American cinema. In The Coen Brothers: This Book Really Ties the Films Together, film critic Adam Nayman carefully sifts through their complex cinematic universe in an effort to plot, as he puts it, "some Grand Unified Theory of Coen-ness."

Featuring film stills, punchy infographics, and hard insight, this book will be the definitive exploration of the Coen brothers' oeuvre and a must-have keepsake for fans. 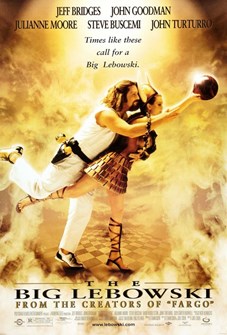 Jeff 'The Dude' Leboswki is mistaken for Jeffrey Lebowski, who is The Big Lebowski. Which explains why he's roughed up and has his precious rug peed on. In search of recompense, The Dude tracks down his namesake, who offers him a job. His wife has been kidnapped and he needs a reliable bagman. Aided and hindered by his pals Walter Sobchak, a Vietnam vet, and Donny, master of stupidity.

Scream 2
Part of: Music Box of Horrors: Dawn of the Drive-in Presented by Shudder