Celebrate Valentine’s Day with the charming, endlessly-quotable romantic comedy that proves sometimes it takes a few tries for love to go right. Does sex make it impossible for men and women to be true friends? That’s the dilemma faced during the eleven year relationship between Harry and Sally, played by a never-better Billy Crystal and Meg Ryan. Featuring a crackling script by Nora Ephron, and Carrie Fisher & Bruno Kirby excelling beyond the stereotypical “Best Friends in a Romantic Comedy”, the Music Box invites you to fall in love all over again with WHEN HARRY MET SALLY.

Come early for a Chocolate & Wine special in the Music Box Lounge!

Movies & Showtimes for
Valentine's Day with When Harry Met Sally 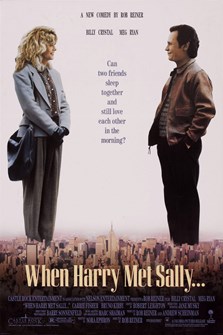 Rob Reiner's romantic comedy documents a very unusual couple. There's never been a friendship quite like Harry and Sally's. From faking an orgasm at the corner deli, to debating the odds of having great sex with a guy named "Sheldon", there's nothing Harry and Sally don't do together. Well, almost nothing…. At the start, they are two recent college graduates who meet while sharing a ride together from Chicago to New York. They decide that it is impossible for men and women to be "just friends," and when they reach The Big Apple, they go their separate ways. Several years later they happen to be seated next to each other on an airplane, and Harry tells Sally about his recent marriage…and several years later, in another random meeting, he relays his divorce…when they become close friends…so close that their respective best friends fall in love.