A FILM BY: Michael Apted 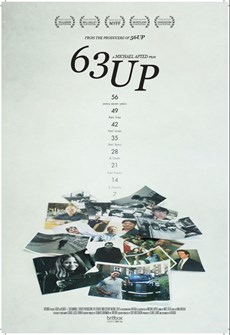 Led by Emmy nominated, DGA and BAFTA® award-winning director Michael Apted (Chronicles of Narnia, Amazing Grace) throughout the decades, this groundbreaking documentary anthology has now reached 63 Up, gaining further illuminating insight into its premise of asking whether or not our adult lives are pre-determined by our earliest influences and the social class in which we are raised. An issue as relevant to our society now as when the series first appeared. The documentary film reveals more life-changing decisions, more shocking announcements and joy and tears in equal measure.

The original 7 Up was broadcast as a one-off World in Action Special inspired by the founding editor Tim Hewat’s passionate interest in the Jesuit saying, “Give me the child until he is seven, and I will give you the man,” and his anger at what he saw as the rigidity of social class in England. 7 Up featured the children talking about their hopes and dreams for the future. As members of the generation who would be running the country by the year 2000, what did they think they would become?

The result was ground-breaking and the follow-up films every seven years have won an array of awards.

Director Michael Apted, who moved to Hollywood in the late 70s to direct films including award winning film Coal Miner’s Daughter, The World Is Not Enough, The Chronicles of Narnia: The Voyage of the Dawn Treader and Gorillas in the Mist, has returned every seven years to chart the children’s progress through life.

Over six decades, the films have documented the group as they became adults and entered middle-age, dealing with everything life has thrown at them in between. Now, as the group reaches retirement age, the film is back to discover what they are doing.

“One of the boldest experiments in world cinema.” -- Variety