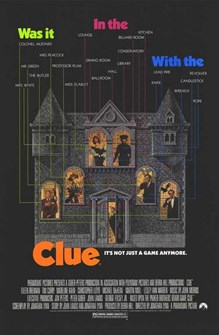 The murderously funny film based (very loosely) on the classic board game, the hilarious whodunit CLUE comes to life with the Midnight Madness shadowcast. A cast of comic ringers, including Madeline Kahn, Tim Curry and Christopher Lloyd, are your usual suspects. Was it Colonel Mustard in the study with a gun? Miss Scarlet in the billiard room with a candlestick? The only thing flying faster than the bullets is the rapidfire dialogue. With the Midnight Madness shadowcast performing in front of the screen, it’s more fun and interactive than playing the game at home!

Four friends attempt to communicate with the spirit world in a musty candle-lit basement. After infuriating a young demon, their knowledge may be their downfall in this dark comedic thriller.