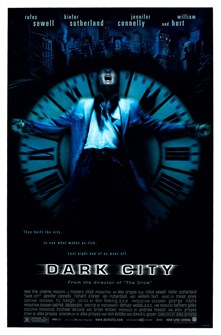 John Murdoch (Rufus Sewell) awakens alone in a strange hotel to find that he is wanted for a series of brutal murders. The problem is that he can't remember whether he committed the murders or not. For one brief moment, he is convinced that he has gone completely mad. Murdoch seeks to unravel the twisted riddle of his identity. As he edges closer to solving the mystery, he stumbles upon a fiendish underworld controlled by a group of ominous beings collectively known as the Strangers.