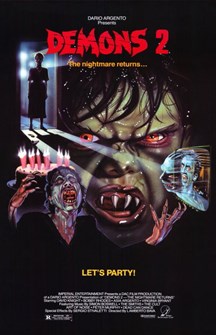 WATCHING TELEVISION CAN BE HAZARDOUS TO YOUR HEALTH... AND BRING THE END OF THE WORLD! From the minds of Dario Argento and Lamberto Bava comes DEMONS 2!

There's a scary movie on TV and the residents of a luxury high-rise building have their eyes glued to their sets. Unfortunately for a young birthday girl, an eternal demonic evil is released through her TV and partygoers soon find themselves fighting an army of murderous monsters! Acid blood, demonic dogs (with a transformation to rival the pup effects unleashed in THE THING), possessed children and rampaging zombie demons are hellbent on unleashing all manner of havoc upon the tenents ! Starring Coralina Cataldi-Tassoni (Dario Argento's OPERA), Bobby Rhodes (DEMONS), and a young Asia Argento in her very first film role, DEMONS 2 is a jaw-droppingly gory film from the golden age of Italian splatter films!