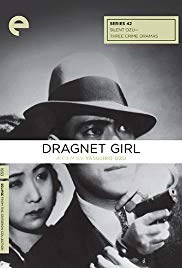 The great Japanese filmmaker Yasujirō Ozu is best known for the stately, meditative domestic dramas he made after World War II. But during his first decade at Shochiku studios, where he dabbled in many genres, he put out a trio of precisely rendered, magnificently shot and edited silent crime films about the hopes, dreams and loves of small-time crooks. Heavily influenced in narrative and visual style by the American films Ozu adored, these movies are revelatory early examples of his cinematic genius.

This formally accomplished and psychologically complex gangster tale pivots on the growing attraction between Joji, a hardened career criminal, and Kazuko, the sweet-natured older sister of a newly initiated young hoodlum—a relationship that provokes the jealousy of Joji's otherwise patient moll, Tokiko. With effortlessly cool performances and visual inventiveness, DRAGNET GIRL is a bravura work from Yasujirō Ozu. (Synopsis courtesy of Janus Films)

**Coupler is less a band than a creative organization. Founded in 2011 by Lambchop veteran Ryan Norris, its core is Norris along with Rodrigo Avendaño and Rollum Haas,  though its membership has at points swelled to as many as eight. At its root, the project is an exercise in mutual cooperation of creative individuals and is an exploration of the intersections of man and machine, live and recorded, composed and improvised, stasis and flux. Their latest release, Gifts from the Ebb Tide, sits at the center of several records that were gestating concurrently and shares DNA with each of them: HeCTAs The Diet, Lambchop’s FLOTUS and Coupler’s Blue Room Sessions.**