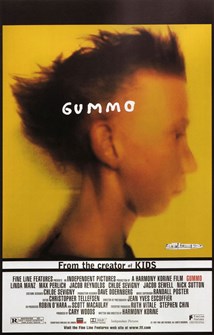 Aptly taking its namesake from the little known fifth Marx brother, Harmony Korine's directing debut instantly divided all who saw it, with Janet Maslin of the New York Times branding it the worst film of the year, and saying "Dirt is no crime, but willful stupidity should be", while Werner Herzog lavished it in praise, & none other than Jean-Luc Godard wrote Korine love letters after seeing it. GUMMO casts its actively nonjudgmental gaze on the daily goings on of working-class inhabitants in a tornado-ravaged small town called Xenia, Ohio through a borderline, avant-garde, non-narrative series of vignettes. Starring Chloë Sevigny (KIDS), Linda Manz (DAYS OF HEAVEN), Jacob Reynolds, & a slew of non-actors & locals, the film drops the viewer into a decidedly real world that oscillates moment to moment from breathtaking beauty to pearl-clinching disbelief. Making use of inventive cinematography, editing, & choice music selections ranging from Sleep & Eyehategod to Buddy Holly & Madonna, it all adds up to a film that is more experienced than seen, and put Harmony Korine firmly on the map as a truly unique voice in cinema.

"Life is beautiful. Really, it is. Full of beauty and illusions. Life is great. Without it, you'd be dead." ~ Solomon