I Was a Shoplifter

I Was a Shoplifter 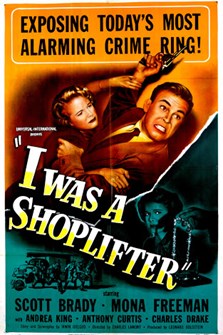 Cop Scott Brady agrees to go undercover to shadow shoplifter Mona Freeman, a judge's daughter who has been coerced into working for a robbery ring run by the always entertaining Andrea King (Southside 1-1000). Her sinister sidekick is a looker named Pepe, played by 25-year-old Tony Curtis. Also keep your eyes peeled for noir tough guy Charles McGraw and a young Rock Hudson.