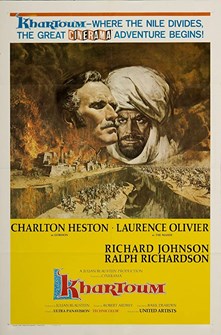 A military spectacle in the tradition of LAWRENCE OF ARABIA, KHARTOUM chronicles Britain's 1883 crisis in Sudan. Charlton Heston, who cited KHARTOUM as one of his favorite films, plays general General Charles Gordon, who is sent by British Prime Minister William Ewart Gladstone (Ralph Richardson) to salvage a bloody and untenable situation. Veteran stuntman Yakima Canutt, who was responsible for teaching John Wayne how to fall off a horse, worked as second unit director on the film’s thrilling action sequences. KHARTOUM was the last film to be shot in Ultra Panavision until Quentin Tarantino’s THE HATEFUL 8, 49 years later.