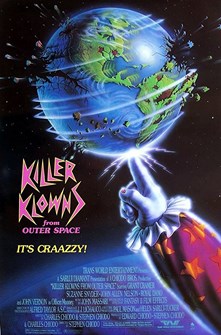 When you think of cult cinema in its purest, most deviant form, a handful of titles spring to mind, but few are as beautiful, nostalgic, bizarre, and iconic as the Chiodo Brothers 1988 feature debut, KILLER KLOWNS FROM OUTER SPACE. Simply put, this is one of our favorite films of all time, and if you've seen it, then this tale of a small town invaded by murderous aliens that just happen to look like clowns is likely high on your list as well. Using a twisted blend of '50s-style monster movies, dark humor, and some truly creative, colorful ways to die, the film solidifies the idea that clowns should be feared and that ice cream trucks will always be the first line of defense against alien invasion. Do not miss your chance to see this legendary work with an audience!