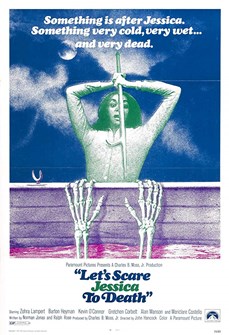 Spoken in somber voiceover by the titular Jessica (Zohra Lampert), these cryptic words are the first we hear in the film—they pull us in immediately and we never stop being transfixed by the creepy events that lead up to them. Following a recent stint in a mental hospital, Jessica moves to the Connecticut countryside with her husband and a friend from NYC to find some peace. Much to their surprise they arrive to find an alluring young squatter in the house—who, as it turns out, bears an uncanny resemblance to a woman who lived there centuries earlier, and who, as legend goes, drowned and now walks the grounds as a vampire. A series of strange occurrences begin, but only Jessica, who may or may not be unraveling again, seems to witness them. With its eerie use of water imagery, gorgeous cinematography, sanity-melting audio track, & impeccably unnerving direction from John Hancock, JESSICA keeps its audience wondering what is reality and what's in the narrator's head...