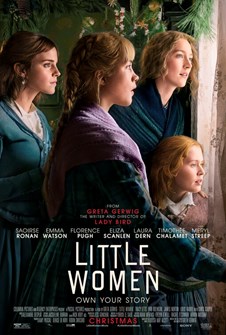 Writer-director Greta Gerwig (LADY BIRD) has crafted a LITTLE WOMEN that draws on both the classic novel and the writings of Louisa May Alcott, and unfolds as the author’s alter ego, Jo March, reflects back and forth on her fictional life.  In Gerwig’s take, the beloved story of the March sisters – four young women each determined to live life on her own terms -- is both timeless and timely. Portraying Jo, Meg, Amy, and Beth March, the film stars Saoirse Ronan (LADY BIRD, BROOKLYN), Emma Watson (HARRY POTTER), Florence Pugh (MIDSOMMAR), Eliza Scanlen (SHARP OBJECTS), with Timothée Chalamet as their neighbor Laurie, Laura Dern as Marmee, and Meryl Streep as Aunt March.

“The best kind of Hollywood film: thoughtful yet escapist, sophisticated yet accessible, expertly crafted and deeply felt.” -- The AV Club

“It brims with ideas about happiness, economic realities, and what it means to push against or to hew to the expectations laid out for one's gender.” -- Vulture