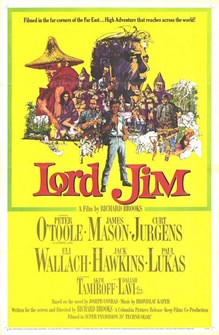 70mm with Magnetic Sound from Sony Pictures Repertory
Peter O’Toole plays Lord Jim, a 19th century seaman who spends his life trying to redeem himself after abandoning his sinking ship. Shot on location in Angkor Wat, Cambodia, Hong Kong, and Malaysia, O’Toole describes the shoot in horror: “Sheer hell. A nightmare. There we were, all of us, knee deep in lizards and all kinds of horrible insects. And everyone hating us. Awful.” With James Mason, Eli Wallach, and Akim Tamiroff. This print was made from the original camera negative!