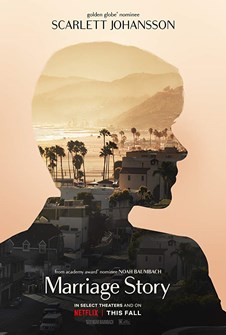 MARRIAGE STORY is Academy Award nominated filmmaker Noah Baumbach's incisive and compassionate portrait of a marriage breaking up and a family staying together.  Adam Driver is Charlie, a 100-percent New York experimental theater director; Scarlett Johansson is Nicole, his principal actress and soon-to-be L.A.-based ex-wife. Their “amicable” breakup devolves, one painful rash response and hostile counter-response at a time, into a legal battlefield, led on Nicole’s side by Laura Dern and on Charlie’s side by nice Alan Alda and not-so-nice Ray Liotta.

“The joys, grace notes and riches of Baumbach's latest are endless.” -- RogerEbert.com

“The work of a major film artist, one who shows that he can capture life in all its emotional detail and complexity” -- Variety