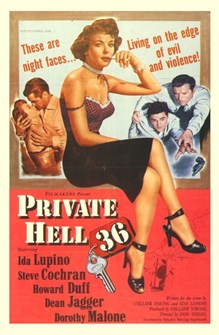 Two L.A. cops, Cal Bruner (Steve Cochran) and Jack Farnham (Howard Duff) stumble into the money trail from an East Coast robbery. Nightclub singer Lilli Marlowe (Ida Lupino), who handled some of the hot cash, agrees to help them hunt the culprit. But when Cal and Lilli fall for each other, the law suddenly takes a backseat to larceny. The "dirty cop" trend of the 1950s reached its apotheosis with this wicked, booze-fueled thriller, with writer-producer-star Ida Lupino burning bright among the burly tough guys. Although its more character study than thriller, director Don Siegel shows flashes of the brilliance about to be unleashed in Invasion of the Body Snatchers.