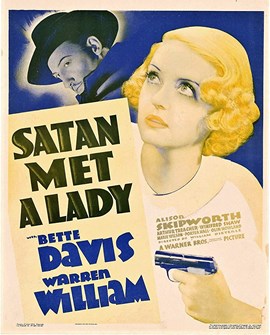 While investigating the mysterious death of his partner (Porter Hall), detective Ted Shane (Warren William) becomes embroiled in a competitive search for the infamous Horn of Roland, desired by a femme fatale (Bette Davis), an Englishman, an old woman and her son. SATAN MET A LADY was the second of three adaptations of the same material that would ultimately culminate in its finest moment with John Huston's 1941 THE MALTESE FALCON. With its goofy mystery machinations & comedic overtones, SATAN feels more in the vein of THE THIN MAN than the bleak, hard-boiled Huston film that would follow. With lines like "After I've cleared up a couple murders, you and I could have lots of fun.", plus Davis chewing it up as the femme fatale, SATAN is an admittedly silly, but oft-delightful curioso mystery film.