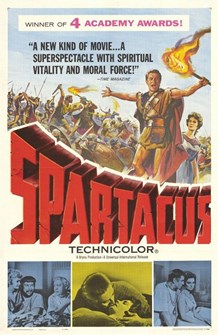 70mm with Magnetic Sound from Universal
Stanley Kubrick was only thirty years old when he directed SPARTACUS, Kirk Douglas and Universal Studio’s answer to BEN HUR, shot in Super Technirama 70 with a cast of 10,500 people. An allegory for the Hollywood Blacklist that simultaneously helped end it, SPARTACUS is tense, brutal, and beautiful. This 1991 reconstruction restores many of the most gruesome battle scenes, originally removed after horrifying audiences at preview screenings. With Charles Laughton, Laurence Olivier, Jean Simmons, an Oscar-winning Peter Ustinov, and Kirk Douglas as SPARTACUS.