The Other Side of Hope

The Other Side of Hope 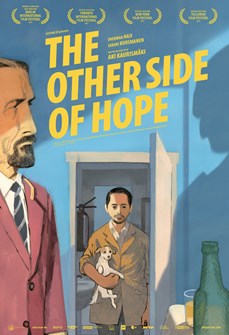 This wry, melancholic comedy from Aki Kaurismäki, a clear-eyed response to the current refugee crisis, follows two people searching for a place to call home. Displaced Syrian Khaled (Sherwan Haji) lands in Helsinki as a stowaway; meanwhile, middle-aged salesman Wikström (Sakari Kuosmanen) leaves behind his wife and job and buys a conspicuously unprofitable seafood restaurant. After Khaled is denied asylum, he decides not to return to Aleppo—and the paths of the two men cross fortuitously. As deadpan as the best of the director’s work, and with a deep well of empathy for its down-but-not-out characters (many of them played by members of Kaurismäki's ever-reliable stock company), The Other Side of Hope is a bittersweet tale of human kindness in the face of official indifference.

“A deeply humane film, as well as a quietly hilarious one.” --Time Out