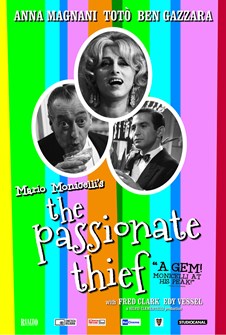 On New Year’s Eve, an insecure, struggling actress (Anna Magnani) has nothing to do. When a colleague invites her to a New Year's party, she jumps at the opportunity. Accidentally, she runs into an old acting acquaintance (Totó), who is helping a professional pickpocket (Ben Gazzara) steal from people during the hustle-bustle of New Year’s Eve festivities. During the course of the evening, they have numerous crazy, humorous adventures all over Rome at different parties, restaurants, and even the Trevi fountain. Magnani’s Tortorella falls for Gazzara’s Lello without knowing what he’s up to, while Toto tries to placate them both.

The digital restoration of THE PASSIONATE THIEF was carried out by Fondazione Cineteca di Bologna starting from the original camera negative and, for the sound, from optical soundtrack negative and a vintage combined dupe positive. These elements were made available from the film’s producer, Titanus. The original camera negative was scanned at resolution and digitally restored at 2K resolution. The restoration was carried out at L’Immagine Ritrovata laboratory in 2013. Special thanks to Rai Cinema for the collaboration.

“A gem. Monicelli at his peak.” — Cahiers du Cinéma
“Reunites Totò with the magnetic [Anna] Magnani, his frequent stage partner during the 1940s, and for one of the few times in his career, he cedes the spotlight to someone else, giving an unusually subdued performance as a middle-aged bit actor” — Chicago Reader