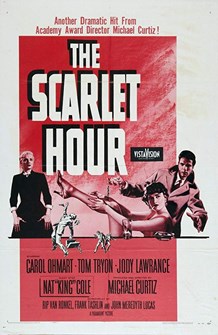 Nearing the end of his legendary career, Michael Curtiz produced and directed this intricately plotted crime thriller headed by a cast of new discoveries. A tony seductress (Carol Ohmart) and her lover (Tom Tryon) overhear plans for a jewel robbery, and believe the scheme will be their deliverance from Ohmart's possessive husband (James Gregory). Culled from the Paramount vault, this 35mm print remains one of the most seldom seen films noir of the 1950s, featuring Curtiz's use of the then-new Fujinon camera lens. You'll only see this at NOIR CITY!