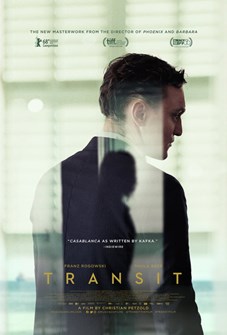 In Christian Petzold's brilliant and haunting modern-day adaptation of Anna Seghers's 1942 novel, Transit Visa, Georg, a German refugee (Franz Rogowski, HAPPY END), flees to Marseille assuming the identity of a recently deceased writer whose papers he is carrying. There he delves into the delicate and complex culture of the refugee community, becoming enmeshed in the lives of a young mother and son and falling for a mysterious woman named Marie (Paula Beer, FRANTZ).

In German and French with English subtitles

“Like a remake of CASABLANCA as written by Kafka.” -- Indiewire