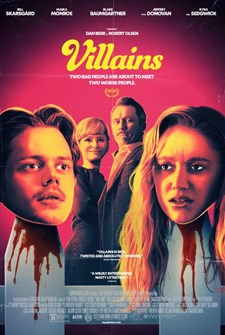 After a pair of painfully amateurish criminals break into a suburban home, they stumble upon a dark secret in the basement that two sadistic homeowners will do anything to keep from getting out in this black-comic thriller. While the robbers think they have the situation under control, the dynamic changes (multiple times, in fact), and the younger pair soon find themselves in various forms of bondage, their future looking dim and their overly polite hosts clearly insane.

A horror-comedy about two teenage goths that try to summon a demon using a satanic ritual they found on Reddit.