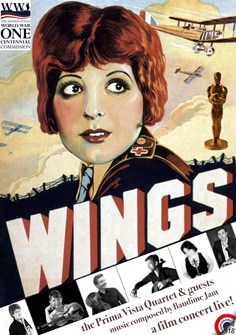 A Silent Movie concert performed by the Prima Vista Quartet with an original score composed by Baudime Jam.

Jack Powell (Charles Rogers) is a young man passionate about motorsport. His neighbor, Mary Preston (Clara Bow), is madly in love with him but he does not pay any attention to her because he is in love with Sylvia, herself in love with the wealthy David Armstrong (Richard Arlen). When the United State engage in the First World War, Jack and David joined the Air Force to fight in France, and they soon become close friend. Mary, meanwhile, joined the Women's Motor Corp to get closer to Jack...

Presented by FIAF and the Cultural Services of the French Embassy with support from The French Mission du centenaire de la Première Guerre mondiale, in charge of the World War One Centenary in France. This program is endorsed by The U.S. World War One Centennial Commission as a commemorative partner, which recognizes commitment to educating the public about World War One and honoring those who served.