Year of the Dragon

Year of the Dragon 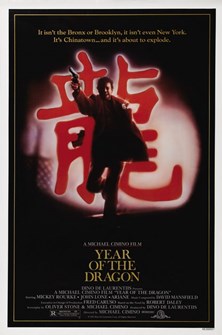 Director Michael Ciminos first film after the infamously disastrous (and quite beautiful) HEAVEN'S GATE, YEAR OF THE DRAGON stars Mickey Rourke as Vietnam War veteran Stanley White, a police captain bent on cleaning up organized crime in New York's Chinatown. Oliver Stone wrote the script, and described Cimino's obsessive directing style as follows, "With Michael, it's a 24-hour day... He doesn't really sleep... he's truly an obsessive personality. He's the most Napoleonic director I ever worked with." The results are big budget Hollywood filmmaking at its most personal.