The Music Box Theatre is teaming up with Chicago Public Schools Student Science Fair, Inc. for a special 35mm benefit screening of Alfonso Cuarón's GRAVITY. A Post-Film Q&A with take place following the conclusion of the film. Speakers will include Dr. Geza Gyuk, Director of Astronomy at the Adler Planetarium.

Chicago Public Schools Student Science Fair, Inc. (SSF) is a 501(c)3 charitable organization that supports independent, extracurricular STEM projects and STEM education and careers among CPS students in grades 6-12.  In 2019, 8000 students participated in local STEM exhibitions at their schools, and 250 students participated in the citywide Exhibition at the Illinois Institute of Technology. In 2022, CPS SSF Inc. will host the 72nd citywide Exhibition of Student STEM Research that allows CPS students to have their projects evaluated by STEM professionals and compete for project awards. SSF supports the travel for CPS students to the Illinois State STEM competition and the International Science and Engineering Fair (ISEF). SSF donors fund after-school STEM workshops and college scholarships in STEM fields for CPS graduates. See https://vimeo.com/93163875 for an interview with Keven Stonewell, CPS STEM Exhibition participant who received top honors at the 2013 International Science and Engineering Fair.

Dr. Gyuk received his B.S. in Physics/ Mathematics from Brown University and his Ph.D. in Physics at the University of Chicago. He conducts research on a range of topics including the characterization of active and outer-belt asteroids and the extent and effects of light pollution. Since starting at the Adler Planetarium in 2000, Dr. Gyuk has focused his educational efforts in bringing authentic science to the public. He co-originated the Adler Planetarium’s efforts that culminated in the founding of the Zooniverse, the world’s largest Citizen Science Platform, with over 1.8 million participants. Dr. Gyuk also founded the Adler Planetarium’s Far Horizons program.  This program allows students, volunteers and the general public to participate in current research through high altitude ballooning (HAB) missions and construction of earth orbiting satellites. Having completed over 130 HAB missions, Far Horizons is currently conducting NITELite, a series of flights monitoring time variation and angular dependence of light pollution in the Chicago metropolitan region, and designing NITESat, an orbital mission to map the Earth at night in unprecedented spatial and spectral resolution 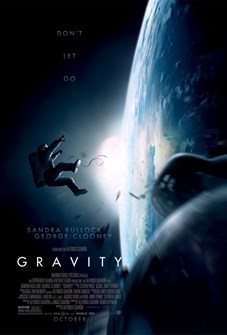 Dr. Ryan Stone (Sandra Bullock) is a medical engineer on her first shuttle mission. Her commander is veteran astronaut Matt Kowalsky (George Clooney), helming his last flight before retirement. Then, during a routine space walk by the pair, disaster strikes: The shuttle is destroyed, leaving Ryan and Matt stranded in deep space with no link to Earth and no hope of rescue. As fear turns to panic, they realize that the only way home may be to venture further into space.