World of The Living Dead: Three by Romero

Join us for a week of Romero's zombie films where each film has a special recorded preshow by author Daniel Kraus, including excerpts from the new long-lost and now-finished George Romero book The Living Dead, playing daily Friday, August 7 through Thursday, August 13.

Films in series include NIGHT OF THE LIVING DEAD, DAY OF THE DEAD and LAND OF THE DEAD. Each film features an exclusive video introduction by Daniel Kraus, co-author with George A. Romero of the new novel The Living Dead, which concludes Romero's Dead saga. If you select the Film+Book ticket, you will be able to pick up a signed copy of the book The Living Dead with your ticket at the Music Box.

George A. Romero invented the modern zombie in his seminal film, NIGHT OF THE LIVING DEAD. Without Romero, there would be no WORLD WAR Z, no THE WALKING DEAD. When Romero died in 2017, his greatest work was incomplete: the zombie novel to end all zombie novels. Now finished by New York Times bestselling author Daniel Kraus (The Shape of Water), The Living Dead is the complete story of the zombie plague, from the first rising to the fall of humankind – and beyond.

It begins with one body. In California, medical examiners Luis and Charlene discover a dead man who won't stay dead. It spreads quickly.

In a Midwestern trailer park, Greer, a Black teenager, and Fadi, a Muslim immigrant, battle newly-risen friends and family. On a US aircraft carrier, living sailors hide from dead ones while a fanatic preaches the gospel of a new religion of death.

At a cable news station, a surviving anchor keeps broadcasting, not knowing if anyone is watching, while his undead colleagues try to devour him. In DC, Etta, an autistic federal employee, charts the outbreak, preserving data for a future that may never come.

We think we know how this story ends.

DANIEL KRAUS is a New York Times bestselling author. With Guillermo del Toro, he co-authored The Shape of Water, based on the same idea the two created for the Oscar-winning film. Also with del Toro, Kraus co-authored Trollhunters, which was adapted into the Emmy-winning Netflix series. Kraus's The Death and Life of Zebulon Finch was named one of Entertainment Weekly's Top 10 Books of the Year, and he has won two Odyssey Awards (for both Rotters and Scowler) and has been a Library Guild selection, YALSA Best Fiction for Young Adults, Bram Stoker finalist, and more.

Movies & Showtimes for
World of The Living Dead: Three by Romero

Day of the Dead 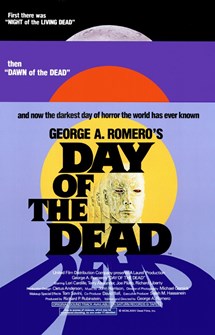 Trapped in a missile silo, a small team of scientists, civilians and trigger-happy soldiers battle desperately to ensure the survival of the human race, but tension inside the base is reaching breaking-point, and the zombies are gathering outside.

Land of the Dead

In a world where zombies form the majority of the population, the remaining humans build a feudal society away from the undead. Ruthless Paul Kaufman (Dennis Hopper) rules and protects this microcosm but enforces painful class distinctions. Second-in-command Cholo DeMora (John Leguizamo) attempts to lead a secret rebellion against Kaufman's tyranny, but when the zombies begin to evolve, the survivors must discover a way to protect themselves from a zombie hoard that can learn and adapt.

Night of the Living Dead 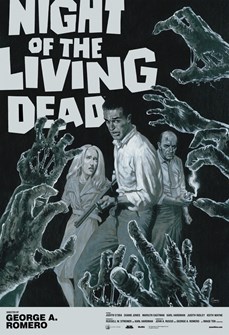 Shot outside of Pittsburgh at a fraction of the cost of a Hollywood feature by a band of filmmakers determined to make their mark, George A. Romero's NIGHT OF THE LIVING DEAD is one of the great stories of independent cinema: a midnight hit turned box-office smash that became one of the most influential films of all time. A deceptively simple tale of a group of strangers trapped in a farmhouse who find themselves fending off a horde of flesh-eating ghouls newly arisen from their graves, Romero's claustrophobic vision of a late-sixties America (literally) tearing itself apart rewrote the rules of the horror genre, combined gruesome gore with acute social commentary, and quietly broke ground by casting a black actor (Duane Jones) in the lead role. Stark, haunting, and more relevant than ever, NIGHT OF THE LIVING DEAD is back.