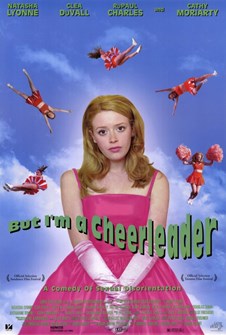 Jamie Babbit's creative feature debut follows Megan Bloomfield, a highschool cheerleader who is sent to gay conversion therapy camp when her parents suspect her to be a lesbian. She meets a girl named Graham who begins to challenge the camp's ideals and what it means to be gay. Filled to the brim with clever innuendos, colourful imagery, and witty characters (including RU PAUL!), BUT I'M A CHEERLEADER is sure to make you smile and laugh while also offering a satirical look at issues surrounding queer identity and gender roles. Using comedy to attack hard-hitting topics like heteronormativity is a change of pace from how these issues are traditionally discussed, and the film doesn't resort to tragic piano music to show us the absurdity of reparative therapy. Using an out-there sense of humour, CHEERLEADER is a vivid exploration of gender, sexuality, and identity — and it's more relevant today than ever. - TIFF