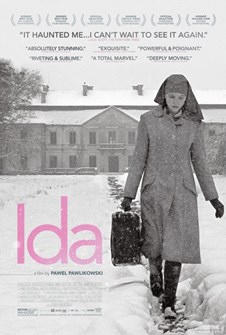 A Part of The Music Box 90th Anniversary - Ticket includes admission to THE DEEP BLUE SEA at 8:45pm | A Music Box Films Release

When 18-year-old noviate Anna learns her true identity as a Polish Jew named Ida from her aunt Wanda, the revelation triggers a heart-wrenching journey into the countryside, to the family house and into the secrets of the repressed past, evoking the haunting legacy of the Holocaust and the realities of postwar Communism. This beautifully constructed black-and-white tone poem won the Academy Award for Best Foreign Language Film in 2015.

***In Polish with English subtitles***

Growing organically out of the Music Box Theatre’s world-class programming, our sister company Music Box Films began distributing international films in 2007. With over a hundred theatrical releases over the last decade, including such notable films as TELL NO ONE, THE GIRL WITH THE DRAGON TATTOO, A MAN CALLED OVE, TRANSIT, and the upcoming BY THE GRACE OF GOD, Music Box Films has carved out a unique niche as a source of memorable and thought-provoking cinema. We celebrate its success with 35mm revivals of two of our favorite Music Box Films releases.