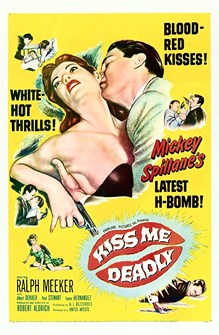 America's anti-Communist crusaders found their superhero in crime writer Mickey Spillane's private eye hero, Mike Hammer, who enjoyed a flurry of film adaptations in the '50s. But in this one, screenwriter Bezzerides pulled the rug out from under Hammer, slyly subverting his "heroics" and replacing Spillane's routine crime plot with a jaw-dropping doomsday scenario. Ralph Meeker is uncomfortably attractive as Hammer: sexy, sadistic, and terminally stupid. Aldrich directs the twisted plot with a bust-out verve that heralded both the end of traditional film noir and the start of a new, more aggressive style of cinema.

Presented as it was released in 1955; in 35mm courtesy of Park Circus