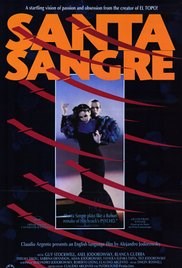 Fifteen years after Alejandro Jodorowsky’s EL TOPO and THE HOLY MOUNTAIN unlocked our collective third eye, the legendary provocateur made his ‘80s comeback with this staggering odyssey of ecstasy, anguish, belief, blasphemy, beauty and madness. SANTA SANGRE continues to enrapture both Jodorowsky newbies and dedicated fans like with its tale of a young circus performer, the crime of passion that shatters his soul, and a macabre journey back to the world of his armless mother.

“A movie like none other I have seen before...a film in which the inner chambers of the soul are laid bare.” -- Roger Ebert

“One of the great hallucinatory experiences in cinema, a visually intoxicating horror trip. A perfect introduction for those eager to travel down more rarely explored routes of international film.” -- Nathaniel Thompson, Mondo Digital

With the ability to travel in time, a lonely girl finds love and comfort by connecting with her past self. Eventually faced with rejection she struggles with her identity and gender, and as time folds onto itself only one of them can remain.