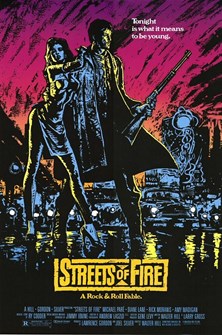 Greaser street gangs and over the top power ballads reign supreme in Walter Hill's neon drenched rock & roll fantasy. A soldier of fortune returns home to rescue his kidnapped rock diva ex-girlfriend from a gang of vinyl clad bikers led by Willem Dafoe and backed up by Fear frontman Lee Ving. Set in a hyper-stylized "another time, another place" (which resembles Chicago thanks to exterior scenes shot on Lower Wacker and under the L) where the night is eternal, the rain never stops, and 50s pulp teenage dreams merge with 80s action bravado (Butterfly knives! Explosions! Sledgehammer fights!).